#EndSARS : Nnamdi Kanu’s ‘role’ and nine other key findings of the Lagos Panel - The Naija Weekly

#EndSARS : Nnamdi Kanu’s ‘role’ and nine other key findings of the Lagos Panel 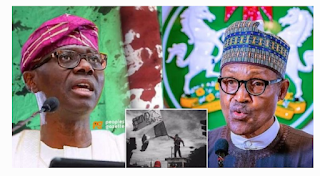 On the night of October 20, 2020, thousands of young Nigerians gathered at the Lekki Tollgate in continuance of demonstrations against decades of police brutality in Africa’s most populous nation.

The historic protests which had swept through the country for about two weeks was metamorphosing into a youth movement against bad governance that had become of the government of the day.

The government panicked and moved to crush the growing civil disobedience. A curfew was abruptly declared.

Lights put out at the Lekki venue and soldiers moved in armed with war-grade weapons on harmless protesters sitting on the floor, waving the Nigerian flag and singing the national anthem.

The President Muhammadu Buhari regime has spent much efforts denying any casualty from the attack. Nigerian celebrity, DJ Switch, Amnesty International, CNN, and other human rights organisations have been harassed and hounded for daring to prove that the Nigerian government committed mass murder of its own youths. Information minister Lai Mohammed led a barrage of attacks on witnesses and survivors.

Now just a year after, the jury is out on what actually transpired on that fateful night. The Lagos State Judicial Panel of Inquiry on Restitution for Victims SARS-related Abuses and Other Matters has turned in its report, indicting the government.

The panel constituted by the state governor, Babajide Sanwo-Olu, in its just-concluded report after one year of taking testimonies from witnesses, lawyers, pathologists, and others, established that soldiers fired live rounds at protesters on the day of the incident, effectively committing a massacre.

“The Panel finds that the firing of live bullets by the Army at genuine protesters at the Lekki Toll Gate on October 20, 2020, resulted in grievous injuries and the loss of lives of the protesters,” the report said. “The Panel also found that the conduct of the Nigerian Army was exacerbated by its refusal to allow ambulances render medical assistance to victims who required such assistance.”

Peoples Gazette highlights other key findings in the report by the Lagos Panel which was submitted to the state government on Monday.

The killing of unarmed protesters was a massacre

Although many including Mr Mohammed condemned the word “massacre” which was initially used to describe the incident, the panel, having taken testimonies from concerned parties established it was indeed a massacre.

“The atrocious maiming and killing of unarmed, helpless and unresisting protesters, while sitting on the floor and waving their Nigerian flags, while singing the National anthem can be equated to a ‘massacre’ in context,” the panel affirmed.

Police complicit in the massacre

Facts also emerged that operatives of the Lagos State Police Command who were also deployed to the protest ground, threatened, brutalised, and injured protesters, as well as killing at least a protester around the Tollgate (the waterside).

“After the Nigerian Army left, the Nigeria Police Force, followed up with the killing of the protesters, shooting directly at fleeing protesters into the shanties and the Lagoon at the Lekki Phase 1 Foreshore, close to the Lekki Toll Gate, floating corpse and one-shot close to Serah Ibrahim,” the report stated.

Contrary to the report of the Nigerian Army headquarters denying its involvement in the massacre, panel findings revealed how the army cleaned up the crime scene to conceal the murders.

“One of the protesters who was shot and taken for dead, Olalekan Sanusi, (video W80 – of Serah Ibrahim) eventually escaped narrating his ordeal and experience stated that at least 11 corpses were in the van, where he had been put in and presumed dead. Dabira Ayuku also testified that she saw seven (7) bodies being put in a military truck at the Lekki Toll Gate, both sets of evidence were uncontroverted.”

This is, however, contrary to a report by a Forensic Pathologist of Lagos State University Teaching Hospital, John Obafunwa who presented autopsy reports of 99 bodies and claimed that three of the bodies were from the Lekki Tollgate massacre.

“The Panel finds that difficulty in identifying the corpses could have been avoided had Lagos State Government provided timely and adequate funding to conduct DNA tests as was done in the cases of DANA Air crash and Synagogue Church building collapse,” the report affirmed.

There have also been controversies surrounding the presence of the Nigerian Army after the state governor repeatedly denied instigating the killing of protesters by inviting the army personnel. He had also stated that he lacked the powers over the military force.

But the panel confirmed Mr Sanwo-Olu invited the army to the scene of the protest ground. “The panel found that there was an invitation of the Nigerian Army to Lagos State made by the Lagos State government through the governor,” the just-released panel’s report stated unequivocally, “before the hierarchy of the Nigerian Army deployed its soldiers to the Lekki Tollgate on the night of October 20.”

Protesters who sustained life-threatening injuries from the shootings were denied immediate medical care, which sped up their deaths.

The protest was not hijacked by hoodlums as claimed

Several claims by the state government and the Nigerian Army had said the protest was hijacked by hoodlums and protesters pelting soldiers with stones and bottles. But findings by the panel corroborated those of rights organisations and media outlets that the protest was peaceful until the army arrived.

“Brigadier-General Taiwo stated that once a protest goes past 2-3 days, it will be hijacked by hoodlums. The Panel finds that this proposition was not substantiated. The EndSARS protest at Lekki Toll Gate, in particular, was peaceful and orderly and was not hijacked by hoodlums,” the panel said.

LASEHMU’s role in the massacre

Personnel of the Lagos State Environmental Health Monitoring Unit and other security agencies arrived at the incident scene on the following day to clean up evidence of bloodshed, as well as depositing bodies at various mortuaries across the state.

“Three trucks with brushes underneath were brought to the Lekki Toll Gate in the morning of October 21st October 2020 to clean up the scene of bloodstains and other evidence.

LCC’s role in concealing the massacre

Findings showed that the staff member of the LCC hampered the panel’s investigation by refusing to provide useful evidence and an attempt to conceal the incident by cleaning up the crime scene.

“The panel found that LCC hampered the panel’s investigation by refusing to turn over some useful and vital information/evidence as required,” the report said.

“From the totality of the evidence before it, the panel finds that some sets of cameras stationed at the Lekki Toll Gate were removed by members of Staff of LCC on October 2020, and they were not tendered before the panel. These cameras would have assisted the panel in its investigation into the incident that occurred in the night of the 20th October 2020.”

A witness has vindicated Nnamdi Kanu, leader of the proscribed separatist group, IPOB who was falsely linked to the mayhem unleashed in the aftermath of #EndSARS.

The witness said Kanu couldn’t have masterminded the chaos that ensued after Lekki massacre as many of the looted stores belonged to members of the Igbo tribe.

“The witness also noted that an audio message which was purportedly from one Nnamdi Kanu, the leader of the proscribed Indigenous People of Biafra (IPOB) claiming the Igbos were responsible for the mayhem in Lagos was untrue, because his assessment revealed that most of those businesses were owned by Igbo people such as Okey Ndibe, Simon Miyesi, Azubuike.”

After repeatedly denying reports of casualties at the scene, the information minister on the first year anniversary of the incident still insisted that nobody died, no family showed up, and no convincing evidence was found. He also wondered why they refused to up at the judicial panel.

But “the Panel finds that most EndSARS protesters and victims of the Lekki Toll Gate Incident of October 20, 2020, were largely unwilling to be identified in public for fear of persecution or harassment by the security agencies and the government generally.

It established that “Immediately after the protest, there was palpable fear that the Army and Police were visiting hospitals to ‘finish up’ the protesters to the extent that some of them could not return home immediately. Some of the protesters received threats and some were being trailed by unknown persons.”