#EndSARS: US may stop military aid to Nigeria over rights abuse, Blinken warns - The Naija Weekly

#EndSARS: US may stop military aid to Nigeria over rights abuse, Blinken warns 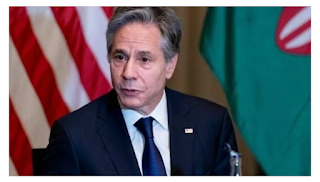 The United States has once again warned that it may stop rendering military assistance to Nigeria if the country fails to protect human rights.

The US Secretary of States, Antony Blinken, who gave the warning, also urged the federal and Lagos State governments to sanction any individuals found to have violated human rights during the October 2020 #EndSARS protests when the white paper on the Lagos State Judicial Panel of Inquiry on Restitution for Victims of SARS Related Abuses and Other Matters is ready.

He warned that if the rights violations persisted, the US government might evoke the Leahy Law to deny Nigeria access to hardware, which includes arms and other military equipment to fight terrorism and other forms of criminalities.

Describing the Lekki toll gate incident as a massacre, the panel report stated that at least nine persons were killed by security agents at the scene and listed 48 names as casualties, including 22 protesters, who sustained gunshot injuries and 15 others allegedly assaulted by soldiers and police.

During a meeting with the President, Major General Muhammadu Buhari (retd.), on Thursday in Aso Rock, Abuja, Blinken had said America anticipated the response of the federal and Lagos State governments to the panel’s findings.

On Friday, Blinken met with members of the civil society in Abuja, reiterating the US’ demand for justice.

In an interview with CNN, the transcript of which was made available to Sunday PUNCH by the US Department of State, Blinken urged Nigeria to bring those indicted by the panel report to book.

He said the US might evoke the Leahy Law on military aid against Nigeria if the country failed to protect human rights.

The Leahy Law is an American rights ordinance that prohibits the US government from providing military assistance to foreign security force units that violate human rights with impunity.

Asked during the CNN interview whether the US had changed its conclusion in the light of the panel’s report, Blinken said he was waiting for the full report to be released by the Lagos State Government.

He, however, argued that the most important thing was ensuring that those found wanting face the full weight of the law.

He said, “But a couple of things are really important.  As I said, the report itself, done by the state government, but then once it’s out, for there to actually be action on the basis of the report, action as necessary by the states, action by the Federal Government, and action in the sense of two things.

“First, making sure that based on what is documented to have happened, it won’t happen again – so there may be reforms that are necessary – and building or rebuilding trust between the citizens and the security services, between citizens and the state.  That is an obligation of both the state government and the Federal Government.

“Second is accountability.  If there are individuals that – as it emerges from this report – who are responsible for committing abuses, there has to be accountability in terms of those individuals.  That too is vital to rebuilding trust between citizens and the state and the security services.”

On what the US would do if human rights abuses continued, he responded, “And, of course, we also have laws in place – the Leahy laws, for example – that make sure that if there are units that have committed abuses, we’re not going to provide equipment to those units.”

When asked pointedly if the Leahy law would be imposed on Nigeria, the Secretary of State responded, “Well, we look in any instance if – and if there are credible allegations that prove, that we believe meet the standard of the law, yes, of course, we’ll apply the law.”

A petition by rights groups including Amnesty International had recently forced the US Congress to call for the stoppage of weapons sales to Nigeria.

When asked by CNN if the US government would bow to pressure by the US Congress to impose an arms embargo on Nigeria amid incessant allegations of human rights abuse, Blinken said it would all depend on Nigeria’s response.

Blinken stated, “If there is genuine transparency, accountability and change that follows from these incidents and from these abuses, I think that’s very important not only to our administration, it’s important to Congress in making judgments about continuing to provide assistance to the security forces.”

He explained that the assistance being given to the Nigerian military was not only hardware but training to tackle terrorism and criminal activities.

Blinken said, “But the assistance itself is not just the hardware that we might provide – airplanes or helicopters – it’s the software, the human software.  Because one of the things that we’re doing is making sure that as we’re providing equipment to deal with profound security challenges that are faced here in Nigeria – terrorism, criminal activity, other violence – that those who will be using the equipment are trained in a way that makes sure that they are doing it to avoid hurting the good guys even as they’re going after the bad guys, to make sure that the laws of armed conflict are fully in mind.  And that if they make mistakes, they’re corrected and they’re brought to light immediately. All of that’s very important.  And, of course, we also have laws in place – the Leahy laws, for example – that make sure that if there are units that are – that have committed abuses, we’re not going to provide equipment to those units.”

The judicial panel, in its report, faulted the state government for inviting the army to disperse peaceful #EndSARS protesters at the Lekki toll gate on October 20, 2020.

The panel noted that the violence recorded in some other parts of the state did not happen at the Lekki toll gate, noting that there was no need for any apprehension on the part of the government to deploy soldiers bearing lethal weapons to dispel peaceful protesters at the toll gate.

The report stated, “The panel finds that although the army gave copious evidence of general commotion, violence and mayhem in other locations in Lagos State other than Lekki toll gate, there is no justification behind the deployment of its soldiers and officers to Lekki toll gate in particular, when there was no violence reported there instead of the other critical areas (for example in places like Orile, Mushin etc), which indeed escalated the violence. The deployment of the army to Lekki toll gate on 20/10/2020, in the absence of any reported violence, was totally unwarranted.”

The Commander, 81 Military Intelligence Brigade, Nigerian Army, Victoria Island, Brig.-Gen. A. I. Taiwo, affirmed that the governor called the Chief of Army Staff as well as the GOC 81 Division to ask for intervention because the police had been overwhelmed.

The panel however noted that the ineffectiveness of the police could not be a justification for the invitation of the army and their deployment to the Lekki toll gate on the said date, especially when the government had already opened up dialogue with the protesters.

Meanwhile, a Senior Advocate of Nigeria, Mr Babatunde Fashanu, has said he is positively surprised that the panel came up with a report that exposed the truth about the Lekki toll gate incident.

Counsel for the Lagos State Government at the panel, Abiodun Owonikoko (SAN), had faulted the panel’s report, contending that it contained at least 40 discrepancies.

But Fashanu, who spoke with one of our correspondents, noted that the panel deserved to be commended for exhibiting boldness rather than covering up the truth.

The SAN said, “My expectations, and indeed, those of many, from antecedents, were that the panel, having been set up by the government to whom it would submit its report, would be a conduit for a cover-up of the government’s atrocities at the Lekki Toll Gate.

“But no, the panel, headed by retired Justice Doris Okuwobi, has shown through this report that it is unbiased and worked as an independent body. It deserves kudos and accolades for that especially in the climate of sycophancy and impunity that presently pervades the country. Recognising that there was a ‘massacre’ at the Lekki Toll Gate on October 20, 2020, listing out the names of victims, including many that were killed or missing, presumed dead, and laying the blame at the feet of the army and police who shot at unarmed peaceful and unarmed protesters while removing corpses of the killed and cleaning up evidence goes in the direct opposite of accounts of the incident by the government especially the Federal Government through its mouthpiece,  Minister of Information,  Lai Mohammed.”