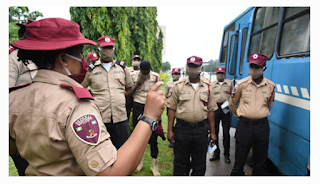 Five persons were killed in an auto crash in Bauchi State on Wednesday, the Federal Road Safety Corps (FRSC) confirmed on Thursday.

“Fifteen people, 13 males and two females were involved in the crash.

“Five died on the spot and they were all males. Nine others sustained injuries, among them were eight males and one female; the only person that escaped unhurt is a female,” according to Yusuf Abdullahi.

The FRSC Sector Commander in the state, Mr Abdullahi said nine other persons sustained serious injuries in the accident.

He said the accident occurred in Nabordo community on the Toro-Bauchi Highway when two vehicles had a head-on collision.

Mr Abdullahi said that it took the FRSC barely 26 minutes to arrive at the scene of the crash to clear the site.

The sector commander said the registration numbers of the two vehicles were not available, but that they belonged to Gombe Line and Adamawa Sunshine transport companies.

He described the vehicles as a Toyota Hummer Bus and a Toyota Sienna bus and attributed the cause of the crash to dangerous driving and speed violations.

The injured persons were taken to Toro General Hospital for treatment, and the remains of the deceased deposited in the morgue of the same hospital for identification.