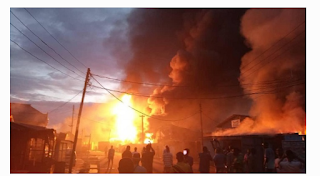 Three people have been confirmed killed in a gas explosion at Ojekunle Street, Papa Ajao, along the Mushin axis, Lagos.

The gas explosion happened at 8:42 a.m. on Tuesday.

Several people got injured in the explosion.

People Gazette could not independently confirm the number of casualties. Emergency responders have not reported the cause of the fire incident.

The agency said the fire broke out from a gas shop close to the shanties.

“The Agency’s Response Team, Eagle Squad at Cappa, have been deployed to a fire outbreak at Ojekunke Street, Ladipo Mushin today, Tuesday, 16th 2021. On getting to the scene, the Response Team discovered an open land with shanties and shops where gas cylinders are stacked. Further investigation revealed that the gas ignited and exploded,” disclosed the agency in a statement on Tuesday. “However, the agency’s team and its fire unit and Lagos State Fire and Rescue Service and Lagos Neighbourhood Safety Corps, LNSC, have been able to put the fire under control, and the firemen are blanketing the affected area.”

It added, “Unfortunately, three male adults have lost their lives to the incident.”

Olufemi Oke-Osanyintolu, the director of the emergency agency, appealed to the residents in the area to remain calm and be cautious of their surroundings as the emergency responders were working to subdue the fire.

Meanwhile, the director of Lagos State Fire and Rescue Service, Margaret Adeseye, said the bodies of the deceased had been recovered.

The agency disclosed that on their arrival to the scene, it was discovered that it is an open space used for several activities, including a beer parlour, mechanic workshop, spare parts sale, and gas shop while housing a makeshift structure.

The agency said investigations would be conducted to establish the cause of the fire.