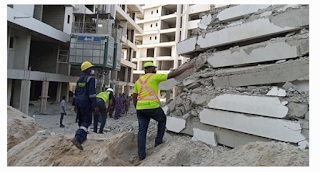 The death toll from the collapsed building in Ikoyi increased to 38, as two more bodies was pulled out by the rescue team Thursday afternoon, according to the Lagos State Emergency Management Agency.

The agency said that two males bodies were recovered from the rubbles, making the number of bodies so far recovered 38 while 9 persons were taken out alive.

“35 males and 3 females, 1 female survivor and 8 male survivor,” LASEMA stated in its update.

Earlier, the National Emergency Management Agency said that 36 bodies has been recovered under the rubble as at Thursday morning.

“So far, 36 people — 33 males and three female — have been confirmed dead, while there were nine survivors ,” said the southwest coordinator of National Emergency Agency, Ibrahim Farinloye.

During his visit to the scene on Wednesday, the state governor, Babajide Sanwo-Olu, said that the survivors are still in the hospital receiving medical treatment.

He said that a six-member panel of enquiry will be set up to investigate the cause of the building collapse.

The building located at 20 Gerrard Road collapsed around 2:00 p.m. on Monday while workers were working at the site.