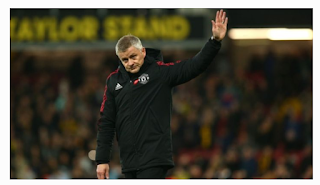 Manchester United board have decided to fire Ole Gunnar Solskajer as manager after a humiliating 4-1 defeat away to Watford on Saturday.

Fletcher-Carrick now ready as interim solution if no instant solution is found.”

An emergency virtual board meeting had been called by the Glazer family, the club’s proprietors, during the second half of the Saturday match and within the talks, which started at about 7:00 p.m. tonight, the group managing director, Richard Arnold, was instructed to negotiate the precise terms of Solskajer’s departure, People’s Gazette learnt.

It is believed that it would cost United about £7.5 million in severance pay to end his three-year tenure.

Solskjaer signed a new contract in August but his deal is understood to include a one-season compensation payment should he be sacked.

Club officials have also been told to speed up attempts to persuade Zinedine Zidane to take charge of the club.