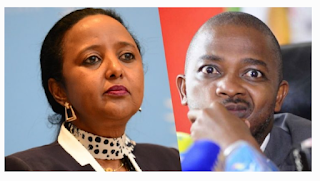 Voice of America reports that Kenyan sports minister Amina Mohamed on Thursday disclosed that the football federation was disbanded after investigations revealed that the football body failed to account for funds received from the government and other sponsors.

The minister said further investigations will be conducted to know the extent to which the country’s football body misappropriated funds, adding that the government may prosecute officials found guilty.

Ms Mohamed also disclosed that a 15-member caretaker committee had been selected to run affairs of the country’s football governing body until fresh elections are held in six months’ time.

The Kenyan government had in October commenced an investigation into the FKF spending to ascertain if 244 million shillings ($2.2 million) given to the federation was used to prepare the national team for the 2019 Africa Cup of Nations (AFCON) finals in Egypt.

However, Nick Mwendwa the president of FKF denied claims of the sports ministry saying he won’t accept the decision taken by the country’s sports ministry.

Mr Mwendwa said his team will carry on with their usual operations despite the disbandment.

“I am still… in charge of the FKF. We won’t accept the decision taken by the sports ministry,” Mr Mwendwa said .

“The FKF reject the (caretaker) committee, and we will carry on with our operations as usual. This means all football activities in the country continue as scheduled and FKF remains in charge,” he added.

“FKF fully complied with the inspection process ordered by the minister, and (provided) detailed and operational documents from the year 2016 to date. But regrettably the inspectors had no serious interest in scrutinising our documents.”

On Thursday, the Harambee Stars held Uganda to a 1 all draw in a 2022 World Cup qualifier in Kampala.

Kenya is gradually losing out on chances of featuring at the World cup finals in Qatar following two big losses to group leaders Mali and draws against Uganda and Rwanda.