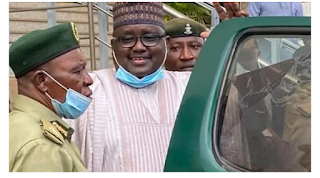 Some social media users have expressed anger at the lack of remorse by a former chairman of the now-defunct Pension Reforms Task Team, Abdulrasheed Maina, after a Federal High Court in Abuja sentenced him to a total of 61 years’ imprisonment for defrauding the Federal Government and some pensioners of N2.1bn.

Justice Okon Abang on Monday said Maina was guilty of all the 12 counts filed on October 26, 2019, against him by the Economic and Financial Crimes Commission.

Maina was subsequently convicted to a total of 61 years in jail to run concurrently for eight years with effect from October 26, 2019.

Since the sentences are to run concurrently, Maina would spend only eight years in jail from October 26, 2019, which means he has only six years left.

The court also ordered the forfeiture of Maina’s three landed properties in Abuja and his bullet proof jeeps and cars. They would be auctioned and the proceeds paid into the accounts of the Federal Government.

However, many Nigerians were gutted by the disposition of the convict who beamed with smile after the verdict of the court.

In viral video clips and photos, Maina, who was led out of the court premises by prison officials, indulged himself as he smiled and waved at some of his associates who occupied the walkway.

Social media users also berated officials of the Nigerian Correctional Service over the seeming preferential treatment accorded to Maina, who wore a well-ironed butter-coloured Kaftan with a cap to match. The convict was also whisked away in a green-coloured air-conditioned Hilux vehicle belonging to the Service, and not the usual Black Maria used to convey convicts.

A Facebook user, Olagbaiye James, exclaimed, “AC inside vehicle conveying a criminal of that magnitude…Reverse is the case if he was not a politician.”

“Imagine, someone that Black Maria should be waiting for outside with a prisoner’s numbered cloth. He is even very happy because he will soon be pardoned,” Henry Ogbole claimed.

Harry Imeh equally said, “Only in Nigeria will someone smile to jail because he knows there is a VIP section in prison.”

Abubakar Muhammad blurted, “Just look at that! The man was laughing, this means no remorse whatsoever, after leading pensioner grannies and grandpas to their early graves for siphoning their entitlements.”

“Pensioners are wailing and dying because they can’t have access to their pension and someone is busy laughing, because he felt that gullible Nigeria will keep shut because he was sentenced to prison. Go to civil service today you will see aged people running after cars begging for alms all in the name that their pension hasn’t been paid. If our leaders could buy eternity, they wouldn’t hesitate,” Ogunoye Oluwasegun said.

Another user, Richard Ndidi, said, “Smiling to prison is giving a notion that the law hasn’t taken effect… N2 billion and not N2,000. The heart of a man is desperately wicked.”

Before his eventual conviction, Maina had jumped bail and fled to neighbouring Niger Republic but he was apprehended in December 2020 and brought back to Nigeria to face justice.

In October 2021, Justice Abang sentenced Maina’s son, Faisal, to 14 years in prison for operating a fictitious bank account with the United Bank for Africa, through which his father, Maina, laundered the sum of N58.1million.

Abang had also ordered that the 21-year-old, who is now at large, be arrested anywhere he is found in Nigeria and remanded in any Correctional Service Centre to serve his jail term.