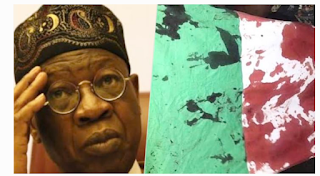 Information minister Lai Mohammed on Monday said the report of Lagos Judicial Panel of Inquiry that probed the aftermath of October 2020 military shooting of protesters in Lekki should be disregarded as fake.

Mr Mohammed insisted there was no massacre, contrary to the panel’s findings that at least 11 unarmed civilians were shot dead at Lekki Toll Gate by soldiers deployed by the Nigerian Army.

“There’s absolutely nothing in the report that is circulating to make us change our minds that there was a massacre in Lekki on October 20, 2020,” Mr Mohammed said at a press briefing in Abuja on Monday.

The Lagos judicial panel on #EndSARS released its findings earlier this month, noting that the “officers of the Nigerian Army shot, injured and killed unarmed helpless and defenceless protesters, without provocation or justification, while they were waving the Nigerian flag and singing the national anthem and the manner of assault and killing could in context be described as a massacre.”

The report submitted to Governor Babajide Sanwo-Olu shows there had been blood and bodies of massacred protesters, revealing that the Nigerian soldiers stole the corpses and wiped clean the crime scene to hinder further investigations by the panel.

The panel also demanded that the Buhari-led regime tender a public apology for the Lekki Tollgate massacre perpetrated by the Nigerian soldiers, as well as a declaration of October 20 as a national remembrance day to honour the fallen young Nigerians.

In the past year, Mr Mohammed has repeatedly said that no protesters died at the tollgate despite multiple reports stating otherwise. Mr Mohammed also attacked international media that reported the killings by the Nigerian Army.

In October, on the first anniversary of the massacre, Mr Mohammed, in a press briefing, further insisted there was no proof that any protester was killed at the tolls. In his statement, he described the incident as a “phantom massacre.”

The minister’s press statement today comes a day after United States Secretary of State Antony Blinken said the Nigerian government’s response to the recommendations of the panel report will inform the Biden administration’s next line of action.