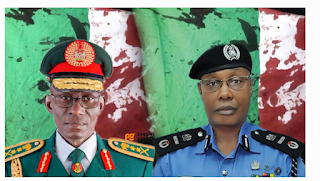 Nigerian soldiers are disciplined and commit murder professionally, unlike the police that carry out extrajudicial killings, says the Nigerian Army hierarchy as they complained about the public release of the Lagos judicial panel’s report on the defunct Special Anti-Robbery Squad (SARS) and the Lekki Tollgate massacre of unarmed, peaceful #EndSARS protesters.

Reacting to the manner the report was released, Mr Irabor expressed his displeasure, saying it should have been “submitted to the convening authority“ before it was publicly released.

“The normal procedure is to have such report submitted to the convening authority, and then there would be a white paper that will be presented, based on which one can make informed comments,” he argued. “I’m sure those of you in the media, you must have seen a report that was released though, in my view, a wrong channel that is making its rounds on the social media.”

Regarding the Nigerian soldiers, the defence chief noted that “it will not be right to disparage men and women who have worked so hard to ensure the territorial integrity of this nation is kept intact” in a veiled reference that the army massacred Nigerian youths.

The military chief explained that the military would not engage in shameful acts and wait to see the panel’s report before taking the next step.

“So when the Armed Forces is called out..errm… It is because there’s a need for the Armed Forces. We need to understand that the Armed Forces are there to keep the peace, to provide the ambience that will enable each and every Nigerian to live up to his desires in peace and harmony.”

Against this backdrop, he urged Nigerians not to make disparaging comments against the military and “inciting comments that will put the entire space on fire.”