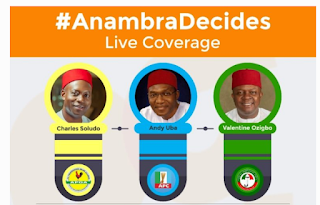 Under the spectre of secessionist turbulence and federal military incursion, voters in Anambra are heading to the polls this morning to elect the next governor that will pilot the state for the next four years.

Electoral office, INEC, says 2,525,471 residents have collected their voting credentials and are ready to exercise their franchise from 8:30 a.m. when the poll opens until 2:30 p.m. when ballot areas would be shut to introduce the counting phase.

Eighteen political parties are participating in the governorship election this year as Governor Willie Obiano wraps up his two terms of four year each in March 2022.

The five major candidates are Charles Soludo, All Progressives Grand Alliance; Valentine Ozigbo, Peoples Democratic Party; Andy Uba, All Progressives Congress; Ifeanyi Ubah, Young Progressives Party; and Godwin Maduka, Accord Party. The Biafra separatist crisis is expected to prove pivotal as to whose favour the election will swing, but the ongoing military campaign across the state could also favour some candidates, especially Mr Uba whose ruling APC controls the federal security framework.

Mr Soludo has the support of incumbent Mr Obiano and the popularity of APGA in Anambra; while Mr Ubah’s YPP is also expected to have a good showing on the back of his steep war chest.

Peoples Gazette, in partnership with CLEEN Foundation, will report developments across the 21 local government areas of the state throughout the day. New updates will refresh automatically.