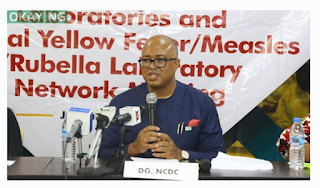 The Nigeria Centre for Disease Control (NCDC) says that Nigeria’s COVID-19 infections continue to rise as 65 additional cases were registered and no death on Friday.

On Saturday, the NCDC disclosed this on its daily COVID-19 report.

The Nigerian public health agency said that the country’s case fatality toll stood at 2,902, as of Friday.

It noted that the number of infections in the country had increased to 212,511 cases.

The NCDC added that 204,184 people have been successfully treated and discharged across the country.

The agency stated that Kaduna State reported 20 cases, followed by Gombe with 10 cases.

While noting that Lagos State, the epicentre of the virus, reported three cases, four states of Delta, Edo, Kano and Oyo reported two cases each.

It however noted that six states: Ekiti, Gombe, Ogun, Ondo, Osun and Sokoto reported no case on Friday.

The Nigerian public health agency said that the country currently has 5,497 active coronavirus cases, while a total of 3,340,313 blood samples have been tested since the pandemic began across the country.