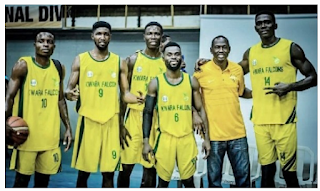 The Nigeria Customs Service has defeated Kwara Falcons 76-73 to record their first win of the 2021 Super 8 Men’s Premier Basketball League.

Kwara Falcons led in the first and second quarters, 21-17 and 26-15 respectively, but the Nigeria Customs fought back and won the third and fourth quarters to take the lead.

They would go ahead to beat the Kwara Falcons 19-14 and 25-12 respectively to make the final score 76-73, thereby recording their first winning.

Speaking to journalists after the match, Nigeria Customs coach Scott Nnaji said “We never knew we were going to finish the league this year; we thank God that the Ministry of Sports came in to assist and make sure that we play the games.

The teams from Atlantic Conference are Rivers Hoppers, Kwara Falcons Lagos Islander and Police Batons, while those of the Savannah Conference are Kano Pillars, Gombe Bulls, Nigeria Customs and Benue Braves.

The 2021 Super 8 Men’s Premier Basketball League, which started on November 12, is expected to end on November 17 at the Moshood Abiola National Stadium, Abuja.

Email ThisBlogThis!Share to TwitterShare to FacebookShare to Pinterest
Tags: Basketball