Nigerian Army is not our rival: Police - The Naija Weekly

Home News Nigerian Army is not our rival: Police

Nigerian Army is not our rival: Police 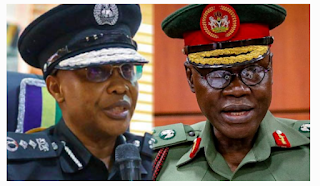 There is no rivalry between the Nigeria Police, the Nigerian Army and other security forces, says police commissioner in Lagos, Hakeem Odumosu.

Mr Odumosu further claimed that there was no rivalry among the country’s security agencies.

This week, the Chief of Defence Staff, Lucky Irabor, took a swipe at the police saying Nigerian soldiers are disciplined and commit murder professionally, unlike the police officers that carry out extrajudicial killings.

According to the police commissioner in a statement, the police and the military are members of the same big family pursuing the same goal in the nation’s interest.

Mr Odumosu stated this during the study tour of delegates of the Senior Course 44 of the Armed Forces Command and Staff College, Jaji, to the Lagos police command on November 16.

The statement indicated that the police chief also presented a paper titled ‘Contribution of the Nigeria Police to the Enhancement of National Security in Lagos State and Nigeria as a whole’.

“The commissioner of police said that the visit will afford the course participants to get a thorough knowledge of the strategies being adopted by the police to secure the citizens, business entities, private and government facilities and other critical infrastructures of national interest in the state,” the statement explained. “The strategies, the CP emphasised, include but not limited to proactive and intelligence-driven security strategies to tackle the menace (of crimes and criminality) head-on and ensure a secured environment.”

Speaking on the recently released #EndSARS report detailing soldiers and police’s atrocities, Mr Irabor said, “In the meantime, until I see the full extent of the report, I may not be able to…but I can assure you that the Armed Forces of Nigeria are disciplined, well-disciplined and will not engage in any ignoble act.”