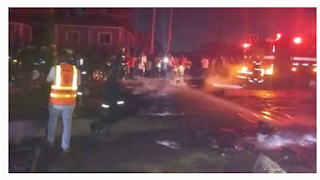 The police in Abuja have dismissed questions over suggestions that a Friday night explosion in Kubwa, a suburb of Abuja, which has killed at least five persons and injuring many, was a bombing incident.

The Kubwa Police Area Commander, ACP Mohammed Ndagi Shebe, debunked the rumour that it was a bomb explosion.

“You can see it yourself,” he said as he flashed a torchlight to the kerosene tank which allegedly caused the explosion.

According to him, it was a kerosene surface tank that exploded.

“That is what brought the inferno,” he added.

Mr Shebe said he could not tell if the kerosene could have been an adulterated one but confirmed that four dead bodies had so far been evacuated from the scene.

The incident happened at the popular Kubwa Village Market on Friday night, at the junction leading to the L.E.A Primary School, Jaji Street, and a few metres away from St Luke Catholic Church.

Bodies of the victims were being evacuated by the combined team of officers of the Nigerian police, Nigeria Security and Civil Defence Corps (NSCDC), Fire Service, among others.

The inferno, which gutted the adjoining shops in the area, had been extinguished by the Fire Service men.

A witness, Chima Nnamdi, told NAN that the sad event occurred at about 7:15 p.m.

Mr Nnamdi said he had, so far, counted at least five bodies, some of which were burnt beyond recognition.

He said several other people, who sustained injuries, had been taken to Kubwa General Hospital.

He said that the kerosene might be an adulterated product.

Another witness, who simply called herself as Jennifer, said the kerosene seller and her two children also died in the fire incident.