PROFESSOR NIYI OSUNDARE ON RELIGION AND NIGERIANS - The Naija Weekly 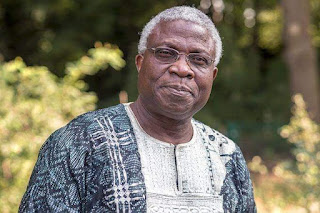 "Religion has killed rational thinking in Nigeria. I say this all the time, our country is still in a pre-scientific era. That is why things are like this. We don’t think logically; that is why any ruler, any fool would seize the reins and rule us, because we would always find an excuse for being ruled or being led by the nose.

Not long ago a pastor said he was between two cities and he discovered that the fuel in his car had run out. He actually checked and saw the fuel in the car was completely gone. But because of his act of faith and on the strength of his prayers, he was able to do two hundred miles on an empty tank! When he declared this testimony, people clapped and shouted “ Hallelujah!” I never heard anybody say how can?"

"Nigerians don’t ask questions; that is why the imams and the pastors lead them by the nose, and the politicians also complete their humiliation and disempowerment. And between the clerics and the political functionaries, there is a very close liaison. It’s a kind of power structure; one controls the political, social realm, the other controls the spiritual, metaphysical realm and they are together.

Many Nigerians are not rational, interrogative people. In fact, in this country today, if you are the interrogative type you are easily labelled, branded, and condemned. People even wonder: why are you always asking questions?"

"Another problem: well, our people are docile and the reason why they take all kinds of cheating is that many of them envisage themselves in the position of power someday, too. If I am X and the oppressor is Y, and the oppressor is oppressing me, stealing all the money, and making life difficult for me and my children, I am not likely to attack him. I’ll pray to God to let my own “miracle” happen so that someday, he will go and I will be in his place. No; I am praying for him to go but for the structure to remain."