Rudolf Okonkwo: How to avoid being sued by Vice President Yemi Osinbajo - The Naija Weekly

Rudolf Okonkwo: How to avoid being sued by Vice President Yemi Osinbajo 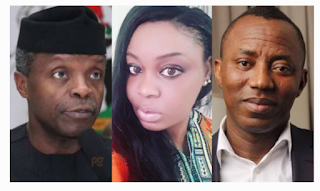 Vice President Yemi Osinbajo is planning to sue you. Yes, you.

I know that you don’t know it yet. That is why I am bringing this wonderful news to you. It is not only Google, RootsTV, Punch, Vanguard and Saharareporters that he is threatening to sue. Those people deserve to be sued to extinction if you ask me. They cannot be publishing unconfirmed stories when our honourable Vice President and our distinguished class of politicians are ever ready to confirm stories day or night, abide by the Freedom of Information Act as soon as you request it and are great advocates for transparency and accountability.

The big story today is that you are now on the Vice President’s list of people to sue. Lucky you. You better buckle up. You better start looking for a lawyer. You better learn how to write a proper letter of apology and be ready to publish it on the front pages of two national newspapers, at least. Mind you, that front-page publication costs a lot.

What did you do?

The Vice President is planning to sue you because you shared a news story about him on your Facebook page. Yes. That is it. You shared it on Twitter, Instagram, Whatsapp and Olango. Do you think he didn’t see it? He did. His army of a million warriors itching for him to defeat the Jagaban of Lagos and become the next president saw it and brought it to his attention.

Also, you told the story to the gossiping passenger sitting beside you in a Danfo while going to work last Tuesday. You think because the Vice President wasn’t there in the Danfo he had no way of knowing what you were gossiping about? How dare you? Did you do your own investigation to confirm the story before you shared it? Did you call the vice president and check the report’s accuracy with him before you shared it? No, you didn’t? Then, that is your fault.

Be ready for the consequences.

The Vice President is not like any other politician in Nigeria, you know. You cannot treat him the same way you treat Goodluck Jonathan or Muhammadu Buhari or Hope Uzodinma. You just cannot. He is the first law professor to become a Vice President. Exceptional! That is not all. He is also the first Senior Advocate of Nigeria to become the number-two-man in Nigeria. It is not an easy accomplishment. If you doubt it, ask Nigeria’s Attorney General and Minister for Justice, Abubakar Malami, how tough it is.

And one more. The Vice President is the first pastor to become the Vice President of the Federal Republic of Nigeria. These are tremendous accomplishments by any standard. So, how dare you question Osinbajo’s holiness by sharing any story that questions his holiness? Are you mad? How dare you share any story about him that is not complimentary? Are you out of your mind? Are you?

Who paid you to do something like that? Yes, who? Who? The Vice President wants you to know that you will vomit that money his enemies paid you to share a non-complimentary story about him to your family group on WhatsApp. And he will make sure you do so when you hire lawyers to defend yourself in court.

Yes. It doesn’t even matter if you know what story is complimentary or not. His lawyer said as much in his threatening letter to you. Ignorance, he said, is not an excuse.

Here is the line: “In law, liability for libellous publications is not limited to the original author or publisher thereof, but it also extends to and includes all those who, out of sheer ignorance, mischief or malice, or all, cause any libellous publication to be repeated, reposted or re-published, either personally or through any platform for which they have control.”

See! I told you. You are in very serious trouble.

For those of you who do not know what is libellous, it is anything that will not bring a smile to the face of the Vice President. I will give you a few examples.

a.) If you are reading a story or an article and the author questions how much the Vice President received or/and spent when he was in charge of the N500 billion National Social Investment Program, please drop the story and run. Do not read further. Do not share. Do not tell a soul about it. It is illegal.

b.) If you are reading a story or an article about how Bola Tinubu’s company, Alpha Beta, got the contract to collect tax for the Lagos State government and the article mentioned Prof. Yemi Osinbajo, stop reading right there. Do not share. Do not tell a soul about it. It is illegal.

c.) If the article says that Osinbajo, while working for Governor Bola Tinubu, was the head of the panel that awarded the contract to Bola Tinubu’s company, Alpha Beta, my friend, tear the newspaper right there. If you are reading it on your phone, throw your phone into the nearest lagoon. If there is no lagoon, throw it into a well or a cesspool. It is less expensive than having to hire lawyers to defend you in court. Trust me on that.

d.) If anyone near you in a bus says anything about Babatunde Fowler, the former Federal Inland Revenue Service (FIRS) chairman, close your ears with wools. If you don’t have wools, use your fingers. He was the other Lagos wonder boy that followed the VP to Abuja on Bola Tinubu’s recommendation. Don’t listen to any talk about the N5 billion allegations against him from his time at FIRS. If you start listening, you may not stop. You may hear about the N100 billion tax evasion allegations against Alpha Beta and his connection to that. And before you know it, you may hear the name of the Vice President mentioned. So steer clear.

It doesn’t matter if you daily share similar stories about other politicians like Buhari, Amaechi, or Tinubu. It doesn’t matter. The Vice President is exceptional. If the story does not proclaim his sacredness, do not share. If the story is not gushing about his love for good governance, the rule of law, the sanctity of life, steer away from it. If the story does not say that Osinbajo is the miracle we have been waiting for, after the miracle from Kastina turned into a nightmare, shake the dust from your feet and run.

For the avoidance of doubt, the honorable Vice President wants a robust and open discussion as a hallmark of a healthy democracy. He loves transparency and accountability and he understands the burden that comes with public office. That is why he invites you to participate in such a conversation, just make sure the discourse is not about him. Don’t, unless he gives written approval.

This one is for all you nincompoops at the People’s Gazette. You have appointed yourselves as the custodians of Osinbajo’s secret decoder and the sole interpreters of the heavenly maladies of Osinbajo. The wise heeds the wisdom of the proverb and gets on with the program. The fool, oh, the fool, spends his siesta in the belly of the vulture only to follow the corpse into the grave. When Osinbajo speaks, do not interpret what he says. Just regurgitate it. His people spent time crafting his speeches so that when it is not a parable of the coward, it is the ultimate Macbethian speech, “full of sound and fury, signifying nothing.”

If you swallow the venom thrown at our exceptional Vice President by the likes of Farooq Kperogi, the Vice President will sue you. There are no two ways about it. Don’t be tempted. Kperogi’s nonsensical thinking that the Vice President is using threats of lawsuits to silence public participation and squash the media and citizens’ responsibility to scrutinize government officials and hold the powerful accountable is a ground for a truckload of lawsuits.

All those gibberish about the Vice President being an apostle of Strategic Lawsuit Against Public Participation (SLAPP) is all baloney. No, it is not true that charlatans like Apostle Suleman are following Osinbajo’s footstep in enforcing self-censorship through frivolous lawsuits. That is pure nonsense. To say you should bite your tongue is not the same thing as to cut off your tongue. When you read Kperogi calling what the Vice President is doing “litigious terrorism” just spit in the air and run. Anyone you hear saying, like Donald Trump, like Yemi Osinbajo, is an enemy of the Redeemed Christian Church of God.

As for those of you who tweeted that blasphemous headline from that Ondo-born Ijaw rascal called Sowore, the Vice President wants you to know that Dante was referring to you all when he said that “the hottest places in hell are reserved for those who in time of moral crisis preserve their neutrality.” What an affront for Sowore to say that the Vice President is more dangerous than Buhari when he had not become president yet and was just using the little power he has now to put those Yoruba irredentists and their Biafran nostalgic brigade in their proper place.

Now that is how to avoid being sued by His Excellency, the Vice President of the Federal Republic of Nigeria, Honorable Professor Pastor Yemi Osinbajo, SAN, GCON.

You have been warned.

– Rudolf Ogoo Okonkwo teaches Post-Colonial African History at the School of Visual Arts in New York. He is also the host of Dr. Damages Show. His latest book is “The Secret Letters of President Donald J. Trump, aged 73.”