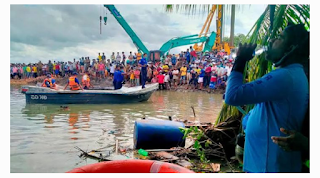 At least six pupils drowned, and three others were reported missing when a ferry carrying schoolchildren capsized in a lagoon in north-eastern Sri Lanka on Tuesday morning, police said.

Eleven others were hospitalised after the incident in Kinniya, 260 kilometres north-east of the capital Colombo.

Navy divers have been deployed to search for the three missing children.

Initial investigations revealed that the ferry was overloaded.

The ferry was alleged not suitable for transporting people but was being used without official approval.