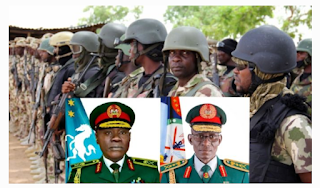 The GOC, however, stated that the army was winning the fight against the proliferation of hard drugs in barracks and theatres. Mr Lagbaja, represented by the Chief of Staff of the Division, Brig.-Gen. Greg Omoregbe, disclosed this at the inauguration of a three-day capacity-building seminar on evidence-based drug prevention, treatment, and control.

The seminar, organised by the division, in collaboration with Bensther Development Foundation, and facilitated by the 82 Division Medical Services and Hospital, was meant for non-medical commanders, principal staff officers, commanding officers, adjutants, administrative officers, and decision-makers.

“The choice of this audience is deliberate because of the pride of place you all occupy in the chain of command in the military as decision-makers,” the general further noted. “You were all deliberately chosen to attend this seminar because the troops and families in the barracks/cantonments look up to you for guidance and direction in their daily lives.”

The GOC charged officers attending the seminar to approach it with all seriousness and share experiences while relating to their troops and barracks and cantonments members so that drug abuse would be totally eliminated in the nearest future.

Speaking, the foundation’s executive director, Nonso Maduka, said, “Our work is made easier since the army has already adopted the international best practice of treating and caring for its personnel with drug abuse ailment for three months free-of-charge and ensuring that such fellow is fully rehabilitated and re-integrated.”