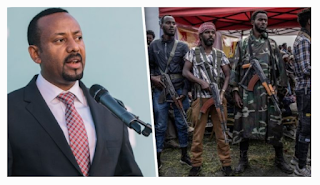 The UK government has advised British nationals against all travel to Ethiopia over military clashes in the country.

The Foreign, Commonwealth and Development Office (FCDO), in a statement on its website, also urged its citizens to leave the country “while commercial routes are available.”

The advice came amid an ongoing conflict in the Tigray, Amhara and Afar regional states of Ethiopia. The FCDO said the conflict “has the potential to escalate and spread quickly and with little warning.”

It added, “Consular support is severely limited across Ethiopia. In the event of deterioration in the political or security situation, the British Embassy may be limited in the assistance that it can provide. Do not rely on the FCDO being able to evacuate you in an emergency.”

It is unclear how many Britons are still in the country.

According to the FCDO, “good commercial options” are available to most destinations from Addis Ababa Bole International Airport, with most domestic flights operating normally.

The UN has recently called on all parties in the Ethiopia violent crisis “to put an end to hostilities and to negotiate a lasting ceasefire.”

The conflict has worsened in recent weeks, with forces in Tigray claiming key cities on a major highway leading to Ethiopia’s capital, Addis Ababa, and linking up with another armed group, the Oromo Liberation Army.

Months of political tensions between the country’s prime minister, Abiy Ahmed, and the Tigray leaders who once dominated the country’s government led to conflict last year.

The Tigray forces say they are putting pressure on Ethiopia’s government to lift a months-long blockade on their region of around six million people.

“The security situation in Ethiopia is deteriorating. We now advise against all travel to the whole country, apart from Bole airport, which remains open for departures and connecting flights. British nationals should leave now while commercial flights are readily available,” Africa Minister Vicky Ford said on Twitter.