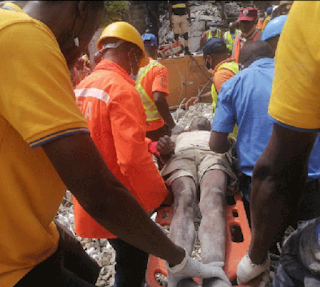 As the death toll in the collapsed high-rise building at Gerrald Road in Ikoyi, Lagos rises to six, two more survivors have been pulled out of the rubble, emergency responders have said.

This brings the number of survivors to seven while six deaths have been recorded so far, according to NEMA.

Speaking to newsmen as the state Deputy’s Governor, Dr. Obafemi Hamzat, visited the scene, a worker at the site at the time the building collapsed, Gabriel Bassey, disclosed that about 50 persons may still be trapped under the rubble.

He said, “This project, 360 Degree, was built by Fourscore Homes Limited. I was trying to plug my phone and not up to five seconds that I left the spot, I saw the building coming down and I ran to safety. We have a lot of people trapped in the rubble, who we need to bring out.

A resident, Morris Ashiobi, said the building did not show any sign before it caved in.

He said, “When the incident happened, I was the first person to climb the building to the last floor and I saw corpses. I started calling people to come and rescue others. We recovered six dead bodies, rescued one, while the rest are still under the rubble.

“The building didn’t give any sign, it just came down. We were still working on it. It took an hour before the emergency agencies came and we had brought out the dead bodies and rescued one person before they came. If I’m not mistaken, about 40 persons were on site, because we were working at the time. Some people came from Abuja today (Monday) to work. I have many friends still trapped in the building.

“When the police came, they chased us out and didn’t allow us to rescue anyone again; if they had allowed us, we would still have rescued more people.”

Lagos State Police boss, Mr.Hakeem Odumosu, confirmed the death of five persons as at Monday while three others were rescued.

However, the South-West Coordinator of the National Emergency Management Agency, Ibrahim Farinloye, said four corpses were recovered from the building, adding that four were rescued.