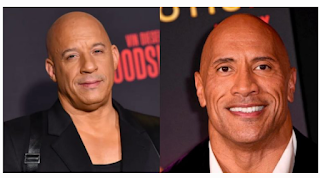 Vin took a picture of himself and Dwayne to his Instagram page, as he captioned a hearty plea to his dear friend.

“My little brother Dwayne… the time has come, The world awaits the finale of Fast 10. As you know, my children refer to you as Uncle Dwayne in my house.

“There is not a holiday that goes by that they and you don’t send well wishes… but the time has come. Legacy awaits,” he captioned.

The actor proceeded to recall his promise to his late colleague Paul Walker, as he narrates his determination to make the finale Fast and Furious the “best Fast”.

“I told you years ago that I was going to fulfil my promise to Pablo [Paul Walker]. I swore that we would reach and manifest the best Fast in the finale that is 10!

“I say this out of love… but you must show up, do not leave the franchise idle you have a very important role to play,” Vin added.

It remains unclear the reason for their feud, however, the duo has been feuding since 2016.

Dwayne has not responded to Vin’s request, and it remains uncertain if he’ll accept the offer.