Yahoo-Yahoo boys, your days are numbered: Osinbajo - The Naija Weekly 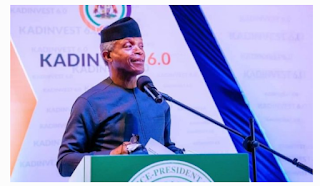 “Do not be distracted by the Yahoo-Yahoo boys that are coming up one day with fancy cars because their days are always numbered,” said Mr Osinbajo. “They will go to jail one day; so, what is the point of making money when you cannot sleep well at night?

Mr Osinbajo gave the warning on Thursday in Ibadan while delivering the first convocation lecture of Kola Daisi University, Ibadan.

He urged them to embrace integrity and good character to excel in their chosen careers.

The vice president also charged youths to make an effort to access various programmes set up by the federal government and the Central Bank of Nigeria (CBN) to support young entrepreneurs and other Nigerians.

Mr Osinbajo added that there were numerous federal government-support programmes they could access and make it in life.

Adeniyi Osuntogun, the pro-Chancellor and Council Chairman of the university, installed Mr Daisi as the chancellor.

“I believe that an educated society is essential to a successful democracy. In this era of technology, it is very certain that probably, as much as 70 per cent of jobs in our future economy will require university education,” said Mr Daisi. “My words of inspiration to the graduands of today is to dream high, aim high and work hard in life in order to accomplish such aims.”

He added, “To commemorate this occasion and especially, to attain the competitiveness and distinction I envisaged, a special Endowment Fund has been established for Kola Daisi University. With every humility, I hereby wish to subscribe the sum of N1 billion as my initial subscription to the University’s Endowment Fund.”