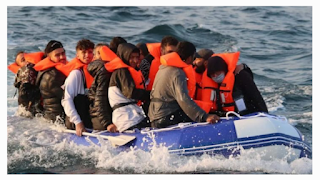 A French court has sentenced three smugglers to prison for arranging unsanctioned trips across the Channel from France to Britain, according to media reports on Tuesday.

The three men received sentences ranging from one to four years in prison on Friday.

According to the report, the smugglers helped arrange trips for 530 migrants between June and August, earning €1.3 million ($1.5 million) for their smuggling rings in the process.

When they were detained, police discovered a notebook in their car containing 150 names with notes on payments and mobile phone videos of people thanking them for helping with the crossing.

Efforts to cross the Channel have come into focus after 27 people died during a smuggling operation in November, in which the boat capsized.

Five smugglers were arrested in the aftermath.

However, France and Britain have entered into discussions since then on how to stop illegal crossings, though they have not come up with a solution.